How do highly conserved regions of PrP control prion formation? 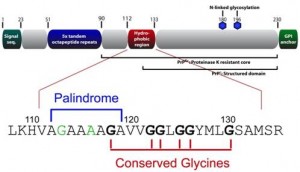 We are interested in understanding how the normal cellular isoform of the prion protein undergoes structural changes to become the disease associated form. We have developed several approaches to study this aspect of prion biology using cellular, molecular and biophysical techniques. We have refined a model based around a highly conserved region of the prion protein (Harrison et al., J Biol Chem 2010). This project will uses a combination of structural and cell biological approaches to investigate the mechanism of prion inhibition through this conserved region of the prion protein.

Molecular mechanisms of A-beta toxicity in Alzheimer’s disease ‐ a role for the prion protein?

Recently it has been demonstrated that PrP can act as a receptor for Aβ oligomers which are implicated in the pathogenesis of Alzheimer’s disease. Aβ is derived from a larger protein called the amyloid precursor protein (APP). We have well established cell lines expressing different forms of PrP and APP (which generate Aβ). These will be used to investigate the interactions of different forms of Aβ with PrP using a combination of biochemical and cell biological assays to determine the molecular mechanisms underlying this interaction.

Investigating the role of microRNA (miRNA) in neurodegenerative disorders

The role of microRNA in regulating the expression of key genes and pathways involved in neurodegenerative diseases are being investigated in both cell and in vivo models of these disorders. Using our cell models we have identified a subset of microRNA genes that are enriched in exosomes and may regulate gene and protein expression by binding 3’ UTR sequences in target cells. These novel sequences are being tested for their functional effects and potential as disease biomarkers. The prediction of microRNA target genes is based upon computational analyses, the advent of next‐generation sequencing technologies has allowed a new method called (CLIP)‐seq assays to determine the exact microRNA sequences that bind to target genes.

This project will investigate the mechanisms, currently unknown, of exosome uptake by cells using modifiers of key cellular pathways and live cell imaging. This project will also investigate the role of modifiers in exosome biogenesis by altering their expression with RNAi, using a lentiviral delivery system in neuronal cells. We are also using high-resolution cryo-electron microscopy to study the structure of exosomes isolated from neuronal cells.